The word “laser” consists of the words Light Amplification by Stimulated Emission of Radiation. A laser device produces coherent light, where the wavelengths are equal, vibrate parallel and with same frequency. The first laser was invented in the USA in 1960. Nowadays typical applications of lasers include the reading of CD/DVD discs and bar codes. In health care, the therapeutic laser has been used for a long time especially in Eastern Europe and Asia. Therapeutic laser (also known as “soft” or “type III” laser) differs from the more powerful laser which is used in surgeries. In physiotherapy, lasers are used e.g. to ease pain and to heal soft tissue injuries. 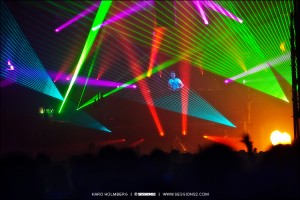 ”Laserpoint” 2009 in the Cable Factory

The mode of action of therapeutic lasers is partly known. There are many hypotheses. Lasers may reduce pain and inflammation by decreasing inflammation reaction related prostaglandin production and increasing ATP production leading to the cell regeneration. The manufacturer of my laser device (Diter) lists the effects of lasers as follows: 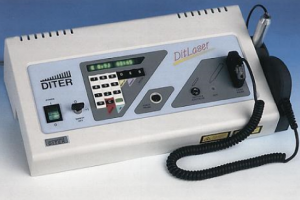 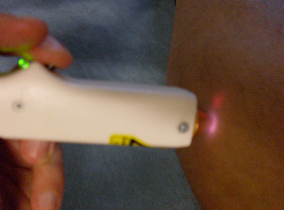 Laser treatment is a safe treatment method. The skin absorbs most (80 %) of the laser light, so no harmful effects are caused on e.g. internal organs. Class III lasers don’t produce heat. Contra indications are rare and the biggest safety risks are related to eyes.

In the Diter laser device, the laser light is automatically interrupted if the distance from the skin becomes too big. This prevents the laser from being pointed in the eyes by mistake. Additionally, the light is on only when the button in the laser pen is pressed (after the laser pen is first set against the skin).

Laser treatment has been researched for over 30 years. The results vary. In the internet, research results can be found using e.g. the following keywords: